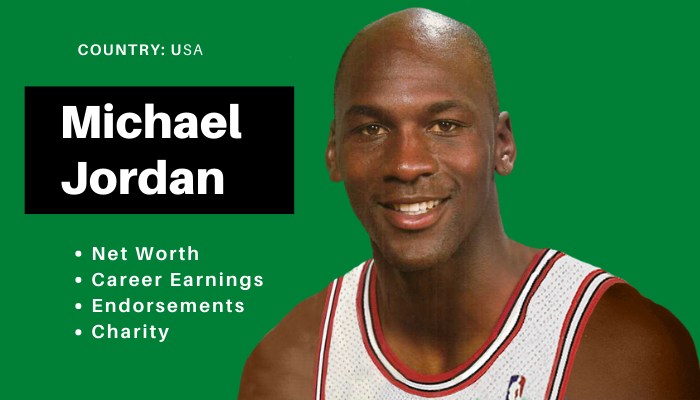 Michael Jordan is a former retired professional American basketball player and a businessman. Jordan is regarded and acclaimed by NBA as the greatest basketball player of all time. He played a huge role in popularizing NBA around the whole world in the 1980s and 1990s. The former NBA players, Michael Jordan has a net worth of $1.6 billion which makes him the richest athlete in the world.

Michael Jordan’s salary was $1.5 million when he retired in 2002/03. After his retirement, the basketball legend has turned into a successful businessman.

Presently, NBA players getting $100 million contracts is not surprising as many players earn more than that. In the last decade, the NBA salary has been increased to another level and enjoyed by today’s basketball stars but you would be surprised to know that the greatest basketball player, Michael Jordan has earned just $93 million in his entire NBA season.

Jordan is the principal owner of the basketball team Charlotte Hornets who compete in the NBA and the 23XI Racing in the NASCAR Cup Series.

According to sources and reports, Michael Jordan net worth is around $1.6 Billion. He became the first billionaire basketball player in NBA history in 2014. Jordan is the fourth richest African American.

In 2019, Jordan become the richest athlete in the world and made history by crossing the $2 billion net worth mark. But recently Forbes updated the decrease of $500 million in Michael Jordan’s net worth due to the COVID-19 pandemic that hit the NBA.

Today, Michael Jordan is one of the biggest and popular athletes in the world and all thanks to the NBA, but his endorsements and investments deal made him rich.

Michael Jordan has earned the majority of his money from endorsements post-retirement. He has deals with Nike, Hanes, Gatorade, and Upper Deck.

In his playing career, Michael endorsed various brands like Nike, Gatorade Coca-Cola, McDonald’s, Wheaties, Chevrolet. Michael Jordan has his own line of apparel and sneakers.

He launched his sneaker line Air Jordan with Nike and his sneakers are one of the world’s most famous and costliest shoe brands.

Michael Jordan is undoubtedly the greatest player to ever play basketball in the history of the game. He was born on 17 February 1963 in Brooklyn, New York. Before becoming a professional player, Jordan played basketball for college.

He represented the North Carolina college from 1981 to 1984. Michael Jordan was selected by Chicago Bulls in 1984.

He has won 2 Olympic Gold Medals, 1 Gold medal in the Pan American Games and 1 gold medal in the tournament of Americas. Besides Basketball, Michael Jordan has also starred in movies and authored books.