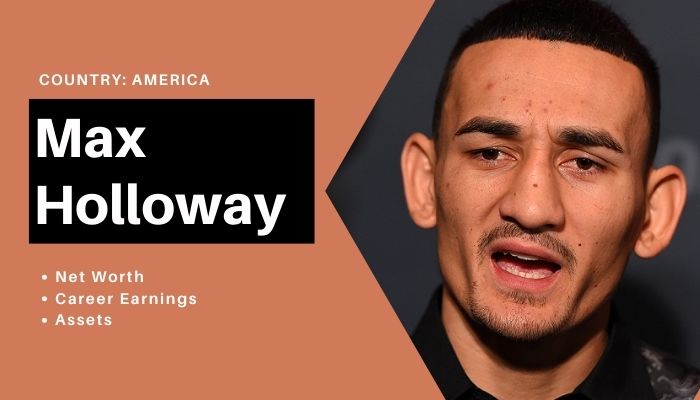 American mixed martial artist, Max Holloway is certainly the brightest prospect in UFC’s Featherweight division. The 28-year-old has carved his way into the top books of best UFC fighters. Best results and hard work reaps an impressive amount of money for any wrestler. According to the popular sports portal, Max Holloway’s net worth is estimated to be around $4 million.

Holloway was born on 4th December 1991 in Hawaii, United States of America. While growing up he learned kickboxing and earned himself a purple belt in Brazilian Jiu-Jitsu.

The young lad had an eye for fighting and wrestling since his childhood. Thus, earning himself fights in Destiny MMA, X-1, and UIC before making his debut for the Ultimate Fighting Championship(UFC).

The current Number 1 in UFC featherweight division made his professional debut for UFC in 2012 and was the youngest wrestler on the roster’s list. However, his UFC debut resulted in a loss vs Dustin Poirier.

Despite an early bumpy ride in his career, Holloway bounced back after the loss against Conor McGregor with a streak of 13 wins. Thus, becoming the youngest wrestler in UFC to have 10 wins under his name.

He weighs 66 kg, which is the maximum limit to compete in the featherweight division. However, it was in 2016 when he fought against controversial 69 kg weighed Anthony Pettis for his first UFC title and he emerged victorious by becoming UFC Interim Featherweight Champion.

While things only got better for him in the next fight against Jose Aldo whom he defeated to become UFC Featherweight Champion for the first time in his career. However, in December 2019, Holloway, unfortunately, lost his title to Alexander Volkanovski.

Max Holloway currently holds the record for most wins in the division with 15 wins to his name. With victories come recognition, fame, and money. Do you know his net worth?

Holloway is listed among the most successful and highest-paid fighter in the UFC. In 2019, he fought 3 fights but ended up losing 2 of them. However, as per reports, it is revealed that Holloway earned whopping $3 Million Dollars last year.

Holloway’s most successful year came in 2016 when he won 2 UFC titles. The overall career earning for Max Halloway in his 8-year stint with UFC is $3.65 million.

Holloway’s prolific career is no less than a dream. He has played 27 matches, emerging victorious in 21 of them and losing just 6.

Disclaimer: All the facts and numbers about Max Holloway net worth are based on the analysis, research and reports released by trusted sources.