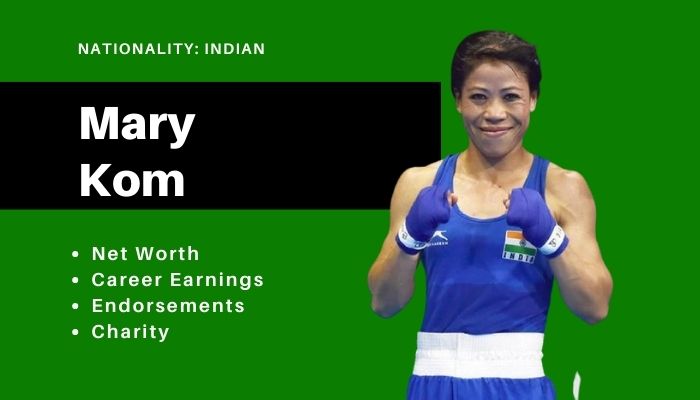 Mangte Chungneijang Mary Kom is one of the best and most successful boxers India has ever produced. She is nicknamed “Magnificent Mary” because of her incredible skills and technique. Mary was born on March 1, 1983, in Kangathei village, Moirang Lamkhai in Churachandpur district of rural Manipur in India. The performance of the Indian boxing legend in the Olympics will directly reflect into Mary Kom’s net worth.

India’s legendary boxer and six-time world champion, Mary Kom playing is battling in the Tokyo Olympics in the Women’s Flyweight. The veteran boxer is carrying the hopes of billion people in the Olympics. The

Mary studied at the Loktak Christian Model High School at Moirang. Mary grew up in humble surroundings. She was the eldest of three children and had a younger sister and brother. Mary used to help and support her family with farm-related chores as her parents Akham, and Tonpa Kom were tenant farmers. She had developed an interest in athletics, especially javelin throw and 400m running during school days.

Her path to being one of the greatest female boxers in the world started at a young age in 1998 when fellow Manipuri, Dingko Singh, had won a gold medal in boxing at the Bangkok Asian Games. She was inspired by his triumph and decided to dorn the boxing gloves. She started her training under the guidance of her first coach K. Kosana Meitei in Imphal. Later, when she got recognized for her talent, she started training under the Manipur State Boxing Coach M. Narjit Singh, Imphal.

Mary kept her interest in boxing a secret from her ex-wrestler father, as his ideology was boxing is a male sport and was concerned that boxing would hurt Kom’s face, reducing the chances of marriage. But later, when he found out about it in a newspaper with Kom’s photo stating she won the state boxing championship in 2000, he started supporting her love and passion for boxing.

Mary Kom’s net worth is reported to be around ₹7 Crore ($ 1 Million), as her earnings were estimated close to Rs. 4 crores or $700,000. The net worth of the veteran boxer is likely to increase after the Tokyo Olympics 2020.

She received Rs. Fifty lakhs each from both Rajasthan and Manipur State Government for winning the Olympic Bronze medal.Also 2 acres of land from the Manipur Government.

Mary Kom signed a two year deal with Puma India, for being the brand ambassador of their women’s training category of apparel. She is associated with 25 brands, including several popular brands and companies like BSNL, Nestle Every Day, and Herbalife Nutrition.

Mary Kom got married to her friend and footballer, Karung Onkholer, in 2005. After her marriage, Kom took a slight break from boxing as she gave birth to twins and was busy taking care of them. After a while, when she started her training, she got back to winning ways and added several more laurels to her cabinet.

Harper Collins published her autobiography in late 2013. A Mary Kom Biography movie based on her life with the title “Mary Kom,” starring Priyanka Chopra had released in 2014, the movie had spread some light on Mary Kom’s struggle as a female sportsperson and how she combated it to become one of India’s most valuable treasure.

In 2016, she was nominated by the president of India to be a member of the Rajya Sabha. Kom is an animal rights activist and active supporter of PETA India, and She has also backed PETA India’s humane education campaign, Compassionate Citizen.