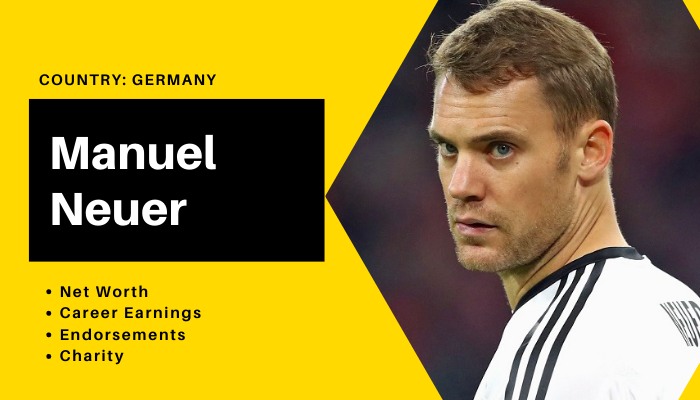 Manuel Neuer is a German professional footballer who plays as a goalkeeper for the German club Bayern Munich. Neuer is currently the captain of both Bayern and Germany and is regarded as one of the 3 best goalkeepers in the world. According to reports, Manuel Neuer net worth is calculated to be around $40 million.

Neuer is regarded as the current best goalkeeper in the world, and one of the greatest goalkeepers of all time. He is known for his exceptional reflexes, shot-stopping abilities, footwork, ball handling.

Manuel Neuer was born on 27 March 1986 in Gelsenkirchen, Germany. He began his career at Schalke’s youth team and went on to feature for their first team. He played at Schalke from 2006 to 2011 making more than 190 appearances. He was signed by German giants Bayern Munich in 2011 and eventually rose to fame at the club.

At Bayern Munich, Neuer has achieved many accolades. He has played 450 matches at Bayern and currently captains the club. With  Bayern, he has won 8 Bundesliga titles, 5 DFB Pokal, 5 German Super Cup, 2 UEFA Champions League, 2 UEFA Super Cups. He made great contributions to Bayern and led them to the sextuple in the 2019-20 season.

Disclaimer: All the facts and figures about Manuel Neuer net worth are based on analysis, research, interviews, official statements, reliable sources, and reports released by trusted sources.