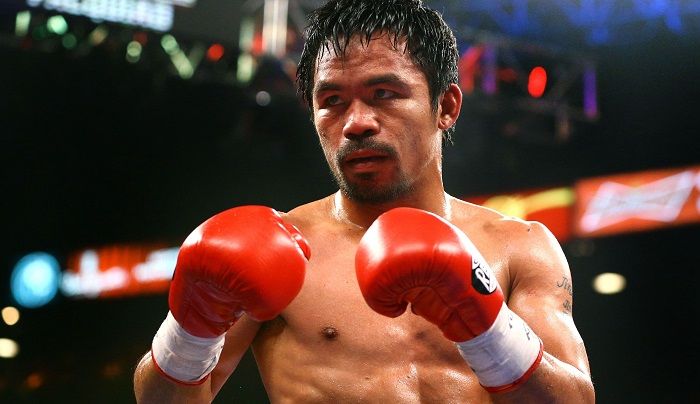 Manny Pacquiao is a known name in the boxing fraternity. The Phillipian international is soon making his comeback in the ring in August 2022 against Errol Spence. He is also the senator of the Philippines and famously known as Pacman in the community. As of 2022, Pacquiao’s net worth is approximately around US$370 million according to the reports.

Pacquaio is the only boxer to win titles in 8 weight categories. Boxing Writers Association of America named him the fighter of the decade (2000s). As per Forbes, he was in the top 100 highest-paid athletes in 2019.

Manny Pacquiao Net Worth and Salary

As per the reports, Pacman has a net worth of around $ 370 million and the highest source of his income is boxing fights.

In the fight against Floyd Mayweather, he took home a whopping $120 million, despite losing the bout. Currently, serving as a senator in the Philippines, Manny earns two hundred four thousand Pesos.

Throughout his career, all his fights have been sponsored by Cleto Reyes Gloves. He is also the ambassador of Hewlett-Packard as he signed a deal worth a million dollars.

Furthermore, he has also signed a deal with Chinese company ANTA. Manny is affiliated with I AM Worldwide and is currently its brand ambassador.

He made his professional debut at the age of 16. Till now, he has fought 71 fights. The Phillipian has a professional record of 62-7-2. Out of his 62 victories, 39 have knockouts. Whereas, he has been knocked out thrice in his career. The two draws of his career are against Juan Manuel Marquez and Agapito Sanchez.

His fight against Floyd Mayweather is considered “the fight of the century”. Pacquiao and Mayweather faced each other in 2015, despite losing the fight Pacquaio got a lot of appreciation from the fans. Other notable pugilists he has faced are Oscar De La Hoya, Jeff Horn, Ricky Hatton to name a few.