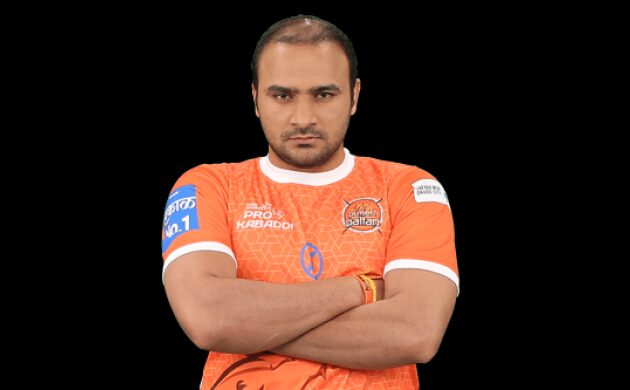 According to reports, Manjeet Chillar has a net worth of around ₹50 Lakh. He is employed by the Indian Railways. The Dabang Delhi team signed Manjeet Chillar for a price of ₹20 Lakhs for the upcoming eighth season of the Vivo Pro Kabaddi League 2022.

All-rounder Manjeet Chillar will now play for the Dabang Delhi who picked y the team for Rs. 20 lakh.

Manjeet Chillar was born on 19 August 1986 in the Nizampur district of New Delhi. He began his career initially as a wrestler but later switched to Kabaddi after facing injuries. Manjeet Chillar came into the limelight in 2010 during the Asian Games.

He captained the Bengaluru Bulls during the inaugural season of the Pro Kabaddi League and was the defender of the tournament during that season. He joined Puneri Paltan in the third season, where he again was promoted as the team captain.

After two seasons with Pune, Manjeet Chillar joined Jaipur Pink Panthers, making him the captain. His numerous captaincy stints reflect his leadership skills and abilities. Manjeet began his professional kabaddi career as a defender but has transformed himself into an all-rounder.

In due course of his Pro Kabaddi career, Manjeet Chillar has played for Bengaluru Bulls, Puneri Paltan, Jaipur Pink Panthers and Tamil Thalaivas. in the auction for the eighth season, he was signed by Dabang Delhi for ₹20 Lakhs.

Manjeet Chillar has won two Gold Medals, one each at the 2010 and 2014 Asian Games. He has won the 2016 Kabaddi World Cup and 2018 Dubai Kabaddi Masters. The Government of India awarded him the prestigious Arjuna Award in 2015. He also won the bronze medal at the 2012 Asian Beach Games