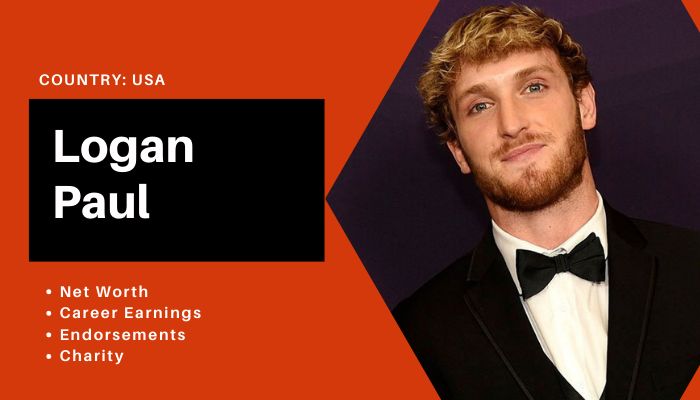 Logan Paul is American Youtuber, professional boxer, influencer and actor. He has more than 20 million followers on his youtube channel. The 25 years old started his professional boxing career in 2019. And within 2 years of his career, he is going to face one of the biggest athletes in the history of boxing Floyd Mayweather. According to reports, YouTube sensation Logan Paul net worth is around $20 million.

Born in Ohio in 1995, Logan is the elder brother of YouTube sensation Jake Paul. Jake is a YouTuber. Right from the beginning, Logan has a thing for videos and youtube. At the young age of 10, he started making videos on a channel named Zoosh. The American was among the top 10 people in highest paid youtube stars of 2018 by Forbes. Here are all the details about Logan Paul net worth

As per the sources, the net worth of Logan Paul is estimated to be $20 million and it is all set to increase after the fight against Mayweather in June 2023. Logan earns maximum money from his youtube account.

Logan Paul is sponsored by multiple brands. One of the main brands endorsed by Logan Paul is the clothing brand Maverick.

According to Forbes, the 25 years old endorses HBO, Hanes, Bic, Dunkin’ Donuts, Nike, Verizon and Pepsi. He also earns money by posting sponsored content about these brands on social media.

During his childhood days, Logan was an all-star high school football team player and he also got the fifth position in OHSAA Wrestling Championship and qualified for Ohio State University Championship.

However, he dropped college to pursue his career as a content creator. He started his content creator career by creating videos on the Vine app. In 2017, Paul shifted to Youtube after Vine was shut down.

His prank videos and collaboration with other famous stars gave him worldwide recognition. Logan Paul also featured in various movies during his career.

Until now, the 25 years old has fought two fights. One was an exhibition fight and the other was one professional. The opponent in both the fights was Olajide Olatunji also known as KSI. The exhibition fight ended in a draw and was considered one of the biggest events in internet history. In the second fight, the American lost by a split decision.

The 25-year-old reportedly earned $900,000 in his fight against KSI. In addition to this, his upcoming fight against Mayweather will no doubt give him a handsome payday, adding to his already massive earnings.

Disclaimer: All the facts and figures about Logan Paul net worth are based on the analysis, research and reports released by trusted sources. The net worth is calculated using data available in the public domain.