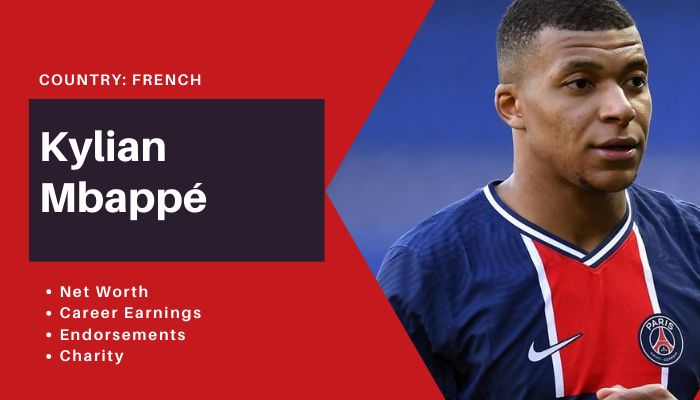 Kylian Mbappé is a French professional footballer who plays as a forward for Ligue 1 champions Paris Saint-Germain. Mbappé is widely regarded as the ‘Next big thing’ in the football community after coming through the ranks of AS Monaco in 2015. Aged just 22, Kylian is already an influential player on and off the field after putting on a string of impressive performances for multiple seasons now. Nike sponsored Kylian Mbappe’s net worth is estimated to be around $176 million in 2023.

Mbappé gets some stick from fans for staying with PSG as the league isn’t much competition. He has won three Ligue 1 titles and two Coupe de France titles at the club level.

He was named Ligue 1-Player of the year and has won as Ligue 1 top scorer twice. He is also the third-highest goalscorer in the club’s history behind Edinson Cavani and Zlatan Ibrahimović. He is one of the best footballers right now and was part of the France World Cup-winning side.

According to Transfermarkt, Kylian Mbappé current net worth is valued at $176 million. He was valued at $38.5 million when he moved from AS Monaco to league Rivals in 2017. He is the most valued player based on his position of centre-forward, French Player, and in Ligue 1.

The Frenchman is quite popular amongst the fans got him some impressive sponsorships. Game creators Electronic Arts’s FIFA 2023 made him the Cover star. Mbappe is also has a partnership with Swiss watchmaker Hublot and the contract is believed to be $1.13 million per year since 2018 after replacing Usain Bolt to become their brand, Ambassador.

Mbappe is sponsored by American sportswear brand Nike and made him one of the faces of their brand along with Ronaldo. He is expected to replace the Portuguese as the main face of the brand once Ronaldo hangs his boots.

Mbappe is one of the best footballer earners and plays for one of the Richest clubs in the sport. He gets $28 Million as Salary per season from PSG and another $14 million through various endorsements. Mbappe has 49.9 Million followers on Instagram and would earn more through each sponsored post.