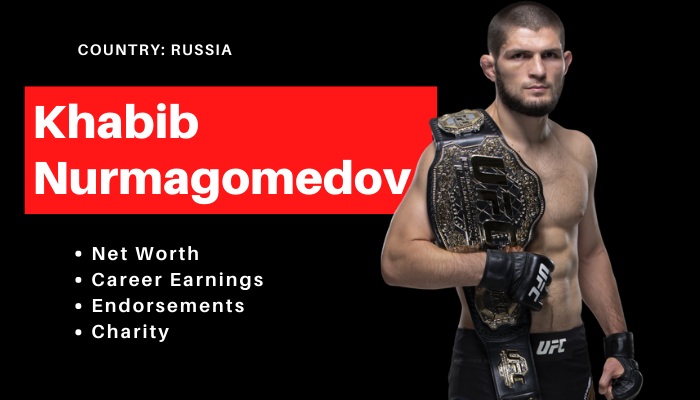 Khabib Nurmagomedov is a retired mixed martial artist. He was one of the most successful UFC fighters. Nurmagomedov made the highlight when he defeated Conor McGregor and the fight drew 2.4 pay per view purchases, the highest in the history of sports. He made his UFC debut in 2012 and within six years, his popularity spiked high. The MMA star retired from the promotion with an impressive 29-0 record. MMA Khabib Nurmagomedov’s net worth is estimated at around USD 40 million.

Nicknamed ‘The Eagle’, he had won all his 29 fights and was the longest-reigning UFC Lightweight Champion. Khabib earned a handsome sum of money from the Ultimate Fight Championship (UFC).

According to the sources, Khabib Nurmagomedov has a net worth of around $40 million. His victory over Conor McGregor earned him $1,540,000 and turned him into a star.

Forbes announced Khabib as the most successful athlete of Russia in 2020. He is the brand ambassador of a payment company called SalamPay. Furthermore, Khabib is sponsored by several companies like Gorilla Energy, Reebok, and Toyota.

Khabib made his MMA professional debut in 2008. His first title was the Atrium Cup. He had a 16-0 record in Russia and Ukraine. This caught the attention of the UFC. Finally, in 2011, Nurmagomedov signed a six years deal with the UFC and started competing in the lightweight division.

The Russian his UFC debut against Kamal Shalorus and started with a win. The long wait for the UFC title finally ended at UFC 223 in 2018. He defeated Al Iaquinta to win the UFC lightweight title. Then, he successfully defended his title throughout his career.

Nurmagomedov has won the performance of the night bonus 3 times in his career. Khabib has won various awards outside the UFC world. He is a two-time world champion in combat sambo. Moreover, he has won two titles in Russian Combat Sambo.

The 32 years old decided to retire after his last fight against Justin Gaethje at UFC 254. He won the fight by submission i.e.triangle choke and defeated his title for the third time.