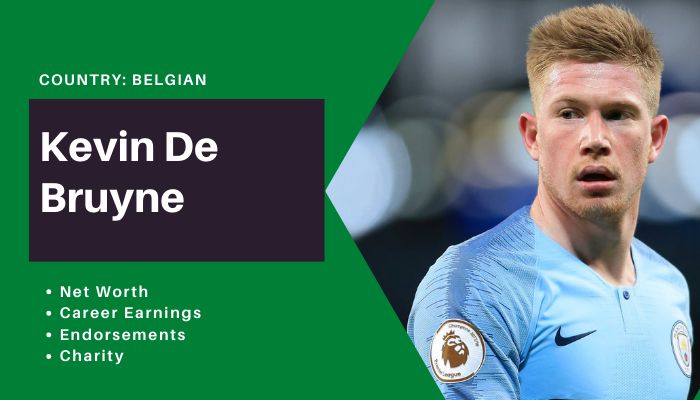 Kevin De Bruyne is a Belgian professional footballer who plays as a midfielder for the English Premier League club Manchester City. The 29-year-old is known for his passing, vision, accuracy and attacking mindset and is the most important player for Manchester City and Belgium. He has signed a new contract at Man City and according to the reports, Kevin De Bruyne net worth is around $60 million.

He started his career in 2009 at Genk in Belgium and was signed by Chelsea in 2012. He was loaned out to Werder Bremen in the German Bundesliga immediately after joining Chelsea. After an unsuccessful Chelsea stint, he joined the German side  Wolfsburg in 2014 and had an impressive season and was the best midfielder in Germany.

Because of his talent, he was approached by Manchester City and joined them in 2015. Having played more than 260 games for Manchester City, De Bruyne has won two Premier League titles, 4 League Cups, and 1 FA cup with Manchester city and currently is one of the best midfielders in the world.

He has an equally marvellous record nationally and has played for Belgium 80 times scoring 21 goals.

De Bruyne is one of the top-earning players in the Premier League and currently earns £300,00 per week. Currently, Kevin De Bruyne net worth is around $60 million.

He has penned down a contract extension recently which will see a rise in his current wages. Kevin De Bruyne’s salary per week is £280,000 along with bonuses. Besides his salary, De Bruyne has endorsements deals with brands like Nike, EA Sports and Orange.

Kevin De Bruyne also believes in charity works and frequency do charity for Rays of Sunshine Children and also, visits the cancer patients.