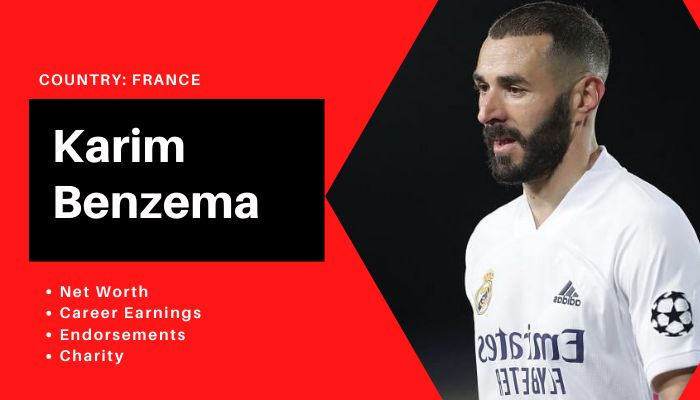 Karim Benzema is a professional footballer who plays for the Spanish club Real Madrid and France national team. He is regarded as one of the best strikers of modern-day football. According to reports, Karim Benzema net worth is stipulated to be around $70 million.

Benzema came into the limelight when Real Madrid signed him in 2009. Since then, he has gone on to play for Los Blancos for more than a decade and still continues to play with them. He is widely regarded as one of the best strikers in La Liga and the world. Benzema is a very talented striker. He is known for his power, strength, his finishing inside the box.

He is really good in the air with a great heading ability. Unlike all-natural number 9s, Benzema is known for his vision, creativity, passing and is a creative playmaker who loves providing assists.

Karim Benzema’s net worth is around $70 million according to our research. He has a base salary of £8 million while weekly wages are £294,000. One of the greatest French footballers, Benzema’s annual salary is £15,288,000.

Benzema has endorsement deals with Adidas, Hyundai, EA Sports, Bwin. Benzema has been part of CharityStars for a long time.

Karim Benzema was born on 19 December 1987 in Lyon, France. He began his career at Lyon and rose through the ranks of its youth academy. Benzema made his professional debut for Lyon in January 2005 of the 2004/05 season. He went on to have an illustrious career at Lyon from 2004 to 2009. He played 118 matches for them scoring 56 goals.

Benzema’s abilities and performances were overshadowed by Ronaldo’s presence but he has made impactful and useful contributions for Real Madrid His quality and skills were prominently highlighted after Ronaldo’s departure. Benzema has been the talisman and the sole spearhead of Madrid’s attack since 2018.

He has played 573 matches and scored 284 goals for Madrid and is the club’s 5th highest goal scorer and all-time top assist provider. Benzema played for France from 2007-2015. He has 81 appearances and 27 goals for his country and is the 10th highest scorer for France.

Disclaimer: All the facts and figures about Karim Benzema net worth are based on the analysis, research and reports released by trusted sources. The net worth is calculated using data available in the public domain.