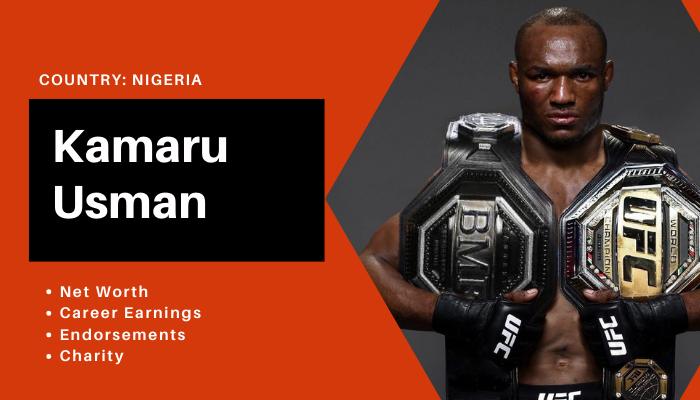 Kamaru Usman is a Nigerian-American professional mixed martial artist and a former freestyle wrestler and Folkstyle wrestler. He is the reigning UFC welterweight champion. As of March 2022, Usman is ranked 2nd in the UFC men’s pound ranking. One of the most successful fighters in the UFC, Kamaru Usman net worth is estimated to be around $3.5 million.

Usman made his MMA debut in 2012 and won his first match, but lost his second match at UFC. After amassing a 5-1 record, it was announced in 2015 that he was going to be on The Ultimate Fighter 21.

He had the Performance of the Night in November 2018 when he defeated Rafael dos Anjos. He won the UFC Welterweight Championship by beating Tyron Woodley in March 2019. He became the first African-born UFC champion after the win. Usman defeated Colby Covington in the Fight of the Night in December 2019 and defeated Jorge Masvidal in July 2022 and defended his title twice.

Kamaru Usman has a net worth of $3.5 million according to our research and reports. He earned his biggest chunk of money in his fight against Jorge Masvidal, a whopping $640,000 at UFC 261.

He also earns an undisclosed amount of money from the pay-per-view sales. His first fight against Masvidal sold 1.3 million pay-per-views. The Nigerian Nightmare has endorsement deals with Trifecta and Reebok.

Usman wants to take the lead in charity by serving as a role model and mentor to African youth. He has charitable endeavours planned across the continent to assist people in overcoming adversity. He wants to help others who are struggling to obtain the conveniences

The last two UFC main event contributed a major increment in the Usman net worth and his earning is definitely going to increase in upcoming fights.

Kamaru Usman was born in Auchi, Nigeria in May 1987. Usman’s father brought his family to the U.S.A when Usman was eight years old. They lived in Dallas, Texas. He started his sports career as a wrestler. Usman began wrestling in his second year of high school at Arlington’s Bowie High School.

He wrestled alongside Jon Jones at the senior national tournament before leaving for college after posting a 53-3 high school wrestling record and finishing third at the Texas state championships. He went on to the University of Nebraska at Kearney (UNK) and finished in the top three in the country each of his three years at that university.

He was a two-time national finalist, won the NCAA Division II national championship at 174 pounds, posting a 44-1 record and 30 consecutive victories. As a wrestler, Usman primarily competed at 84 kilograms, and was the 2010 US University World Team Member Collegiately, he competed at 174 pounds and was the 2010 NCAA Division II National Champion, a three-time NCAA DII All-American and an NAIA National qualifier.

Disclaimer: All the facts and figures about Kamaru Usman net worth are based on the analysis, research and reports released by trusted sources. The net worth is calculated using data available in the public domain.