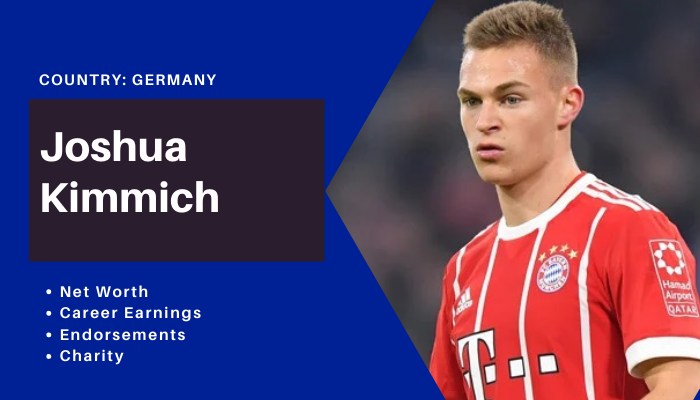 Joshua Walter Kimmich is a German professional football player who plays for Bundesliga club Bayern Munich. The versatile player can play either as a Right-back or as a Defensive midfielder. He is famous for his tackling, passing, and shooting which makes him handy in the attacking half of the pitch. The 24-year old, Joshua Kimmich has a net worth of £81 million.

Kimmich started his career with VfB Stuttgart as a Youth player. He was then snatched by RP Leipzig where he made 53 appearances. In the Winter transfer of 2015 to German Giants Bayern Munich for £7.5 Million where Lion’s share filled VfB Stuttgart’s Pockets.

Kimmich is viewed as the Club legend Phillip Lahm’s successor who served the Bavarians for over two decades. He also views another Bayern Munich legend, Bastian Schweinsteiger as his role model who played a similar position to him.

Kimmich is considered to be one of the best players in his position. According to reports, Joshua Kimmich net worth is estimated at around £81 mllion. He is the most valued player in the Defensive midfielder market and is also the most valued German and Bayern Munich player.

Kimmich has a long-term deal signed with Nike and features the Nike Phanthom boots on his international and domestic matches.

The German is one of the most paid players in the Bayern squad after the contract he signed in 2019. The German currently earns £175,000 per week and the contract ends in 2023.

Along with club and country teammate Leon Goretzka, Kimmich launched an online initiative “We Kick Corona” to help charitable, social, or medical institutions during the COVID-19 pandemic.