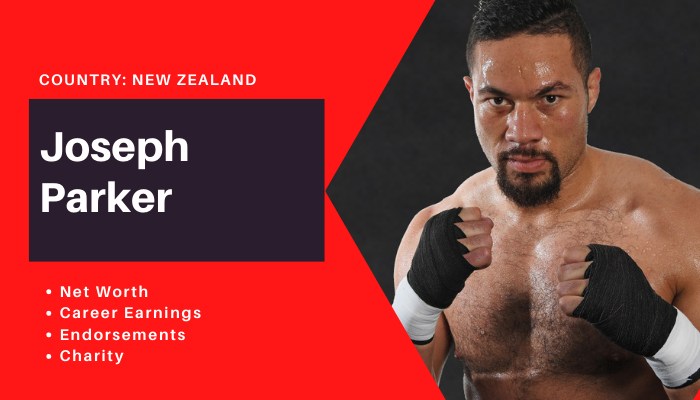 Joseph Denis Parker is a professional boxer from New Zealand. He held the WBO heavyweight title from 2016 to 2018. He has also won various titles like WBO Oriental, Africa, and Oceania titles, as well as the PABA, OPBF, and New Zealand titles. In December 2018, The Ring Magazine declared him as the eighth strongest heavyweights (active). Joseph Parker’s net worth is estimated at approximately $5 million.

Born in South Auckland, Dennis Parker was born on 9th January 1992. He began boxing at the early age of 11. Dennis Parker made his professional debut in 2012 by defeating Dean Garmonsway by knockout. In 2016, he wrote history and became the first boxer from New Zealand or the Pacific region to win the WBO title. He defeated Andy Ruiz and became the WBO champion. Here look at the net worth of Joseph Denis Parker.

As of 2022, the net worth of Dennis Parker is estimated to be $5 million. Most of his earnings are for boxing matches. He earns a huge amount of money for stepping in the ring. Along with it, he endorses and promotes various brands.

In 2017, Dennis won  £1.1 million in his victory against Hughie Fury at Manchester Arena. He got career-high earnings in 2018 against his fight against Anthony Joshua on March 31, 2018. As per the sources, the estimated pay per view purse for the fight was  £24 million, out of which Dennis Parker got £8 million and Joshua took home £16 million.

In his latest fight against Junior Fa for the WBO Oriental heavyweight title, he registered his twenty-eight win of the career. The New Zealand international has won 28 wins to his name in 30 fights.

Joseph Parker is next going to face Derek Chisora in the heavyweight clash on May 1. The venue of the fight is not decided yet but as per the sources the fight will take place in the United Kingdom.