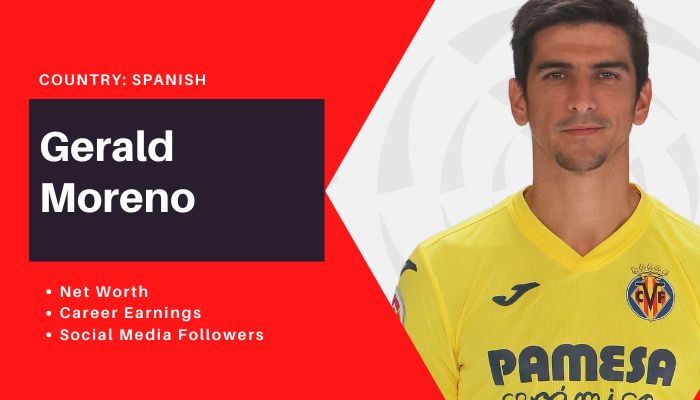 Gerard Moreno Balagueró, known simply as Gerard is a Spanish professional footballer born on 7th April 1992 who plays as a striker for La Liga side Villarreal CF. Donning the number 7 jersey, he is currently the joint-second top scorer in the league with 19 goals, bested only by Lionel Messi who has 23 goals. As per reports, Gerald Moreno’s net worth is estimated at $38.5 Million.

Moreno made his International debut with the La Roja’s on 15th October 2019, playing the full 90 minutes in the 2020 Euro Qualifiers in the 1-1 stalemate against Sweden. He scored his first goal the following month in the same tournament in the 7-0 victory over Malta.

Gerard Moreno’s value started out at $2.2 Million at the start of the 2014 campaign with Villareal and saw a huge boost in March 2018 when it reached $22 Million. Moreno’s net worth has been on a constant rise since April 2022.

The value was $17.60 Million after some minor changes and has reached more than twice now as he has been very impressive in front of goal this season. Currently, Gerald Moreno’s net worth is $38.50 Million.

Gerald Moreno does not feature in any advertisements or endorse any brands currently. He has a FIFA 21 rating of 83 and is the second highest-rated player featuring from Villareal behind Daniel Parejo.

Gerald Moreno is surprisingly not even in the top 5 best earners of his club. He is paid $48,000 approximately on a weekly basis which is almost $2.5 Million annually. His current contract with the ‘El Submarino Amarillo’ will expire on 30th June 2023.