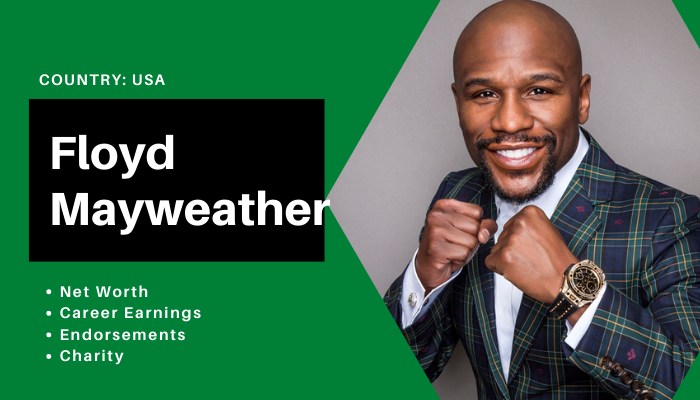 Floyd Mayweather is a world-renowned boxing athlete. The American is one of the most famous and richest boxers out there. He is one of the highest-paid athletes in the world. Floyd has numerous titles to his name. According to reports, Floyd Mayweather net worth estimates at around $450 million while the boxer’s career earnings is estimated at $1.1 billion.

The former world champion is once again steeping inside the boxing to take on YouTuber and boxer Logan Paul in an exhibition fight. This will only increase in 2023 with the lucrative exhibition fight against Logan Paul. Thus, you can expect this figure to rise exponentially.

As per the sources, Floyd Mayweather’s net worth is approximately $450 million. The boxing sensation earns around $300 million per fight. The American boxing champion and promoter is the 5th highest-paid athlete in the world. The primary source of his income comes from sponsorships, endorsements, and fight purse payouts. The boxing legend is expected to earn huge from his upcoming fight against Logan Paul that will only increase his bank balance.

Furthermore, he is only the sixth boxer to cross the career earning mark of $1 billion. The American major source of income is boxing only. Floyd’s other sources of income are few endorsement deals, merchandise and real estate.

Born on February 24, 1977, in Grand Rapids, Michigan, Floyd Mayweather started punching at a very young age. He carried on his family tradition of boxing. His father, Floyd Mayweather was also a boxer. The childhood of Mayweather was rough as his mother was a drug addict and his father was sent to jail. Due to which he dropped out of school and started boxing.

His first professional fight was on October 11, 1996. In the second round, he knocked out his opponent, Roberto Apodaca and won the fight. He has an impressive record of 50-0. During his career, he faced many fiercest opponents.

Two of the most famous fights of his were against Manny Pacquaio and Conor McGregor. His fight against McGregor was the highest pay per view event in boxing history. At both the occasion, the American emerged victoriously.

Disclaimer: All the facts and figures about Floyd Mayweather net worth are based on the analysis, research and reports released by trusted sources.