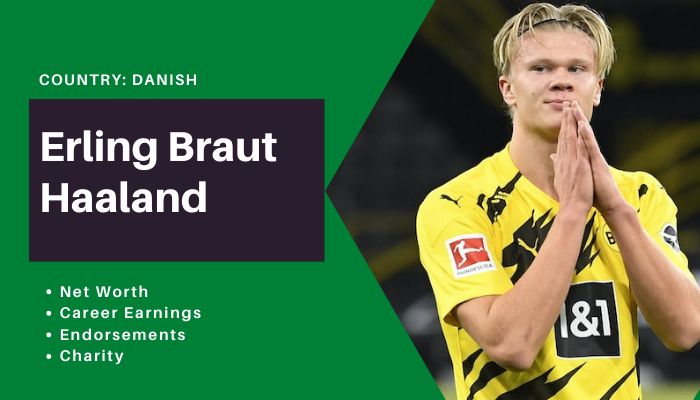 Erling Braut Haaland is a Center forward currently playing with the German side Borussia Dortmund and is the son of former defender Alf-Inge Haaland. The Norwegian wonder-kid has got the world under his feet since debuting with RB Saulzberg in UCL. He is currently one of the best strikers in the world. Erling Haaland’s net worth is estimated to be around £99 million.

When many clubs had eyes on him, he moved to Borussia Dortmund which wasn’t a surprise given their record with developing young talents to global stars. Born in Leeds, England, he was eligible to play for the Three Lions but turned down to play for Løvene.

The Norwegian became the first player in Bundesliga history to score five goals in his first two matches. He also holds the record for most goals scored in a single match in a FIFA U20 fixture when he netted nine goals past Honduras. With clubs like Real Madrid, FC Barcelona, Manchester United and Chelsea trying to sign him in the coming summer.

At present, Erling Haaland net worth according to reports is £99 million. Initially valued at £4.5 Million when started with the Norwegian league with Molde FK back in 2019. His value was £40.50 Million at his peak with Salzburg in December 2019.

He then moved to Borussia Dortmund for £18.5 Million, but it’s believed the German club had to pay an undisclosed sum for Alfie Haaland and Haaland’s agent Mino Raiola.

Haaland is part of Nike’s long array of football starts. According to a report in the ‘The Athletic’, Puma made an offer when Haaland had a supposedly weak contract with Nike. His agent Mino Raiola took advantage of this Puma offer to negotiate an improved contract with Nike.

Haaland managed to negotiate £141,000 per week from the BVB. That totals to around £7,332,000 annually. However, a release clause gets triggered next summer for £65 Million, and he demands £30 Million from the teams who approach to buy him, around four times what he pockets currently.

Mino Riola and Alfie Haaland famously went to Barcelona and Real Madrid on the same day in April 2022 to negotiate contracts, indirectly making it a bidding war between teams.