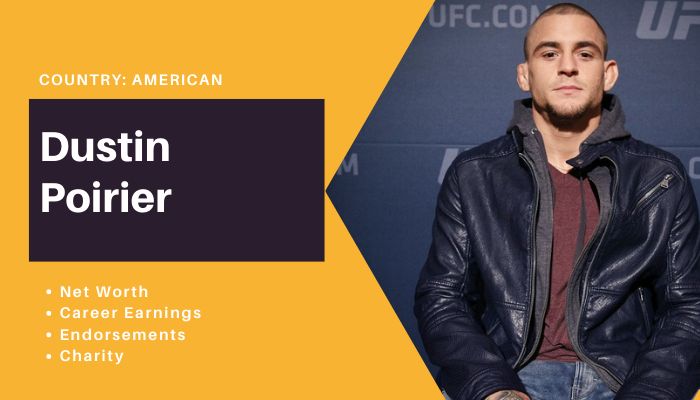 Dustin Poirier is an American professional mixed martial artist. He is a successful MMA star and is currently ranked number 1 in the UFC lightweight rankings. He turned professional in 2009. The ‘’diamond’’ has fought against some of the best fighters and is involved with the ‘Fight of the Year’ bouts. Poirier’s major source of income comes from the fighting and he set to earn big from his upcoming fight, Poirier vs. McGregor 3. According to reports, American professional mixed martial artist Dustin Poirier’s net worth is around $4 million.

Dustin Poirier Net Worth and Salary 2022

Poirier has earned more than  $2.9 million in the due course of his career and his biggest payday came against Dan Hooker in June 2022 when he earned $370,000. Dustin Poirier’s net worth is estimated to be $4 million.

He is a significant figure of mixed martial arts and has endorsements collaboration deals with Reebok, clothing brand Robert Graham.  He also has tie-ups with Celsius Energy Drink. He also has his own business venture called ‘Poirier’s Louisiana Style’ which is a Cajun hot sauce brand.

He is massively involved in charity work and has his own foundation named “The Good Fight foundation” which help in various ways like providing drinking water to African children, donating food to the hospitals in his hometown of Lafayette during the pandemic.

He has raised in the excess of $300,000 by auctioning off his fight kits throughout his UFC career.