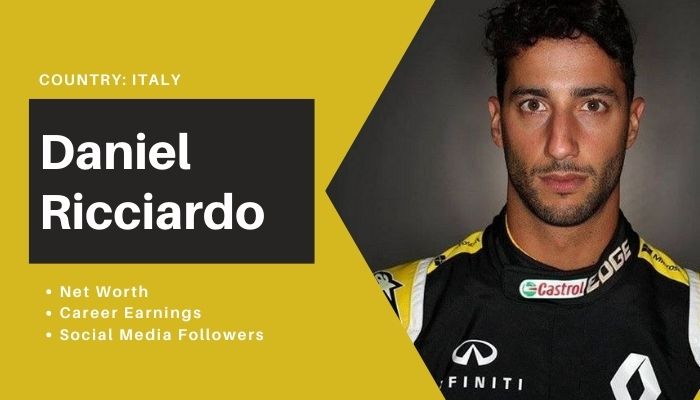 Daniel Ricciardo is a name very well know in the F1 circuit and undoubtedly one of the most renowned racers and regular podium winner of this era. Though he has a big smile and laid-back persona but beware, he is fearless and razor-sharp when it comes to racing and is referred to as “honey badger” for his nature. As per latest reports, Daniel Ricciardo’s net worth is estimated to be around $50 Million.

Fans love him for his great sense of humour and trademark ‘Shoey celebration”. But for those who haven’t heard his name, Daniel Ricciardo is an Australian F1 driver currently representing Team Renault in Formula One.

The Australian racer was ranked 48th on the Forbes list Highest paid athletes in 2022, his earnings were amassed to be $29M this year, with $27M coming through F1 winnings and salary and $2M through Endorsement deals.

Daniel Ricciardo’s overall net worth is estimated to be around $50 Million.

One would expect as a professional F1 racer his love for cars will reflect in his garage, but that’s not the case he owns a relatively small collection of vehicles including a Ford F-150 Raptor, a Porsche 918 Spyder and a Range Rover.

Daniel was born in Perth, Australia on 1st July 1989, his mother is Australian born, but his father is Italian. Ricciardo’s inspiration to get behind the wheels came none other than from his father, who used to drive in motorsports racing at Barbagallo Raceway in Wanneroo.

At the young age of Nine, Daniel used to take part in Karting events. The 31-year-old made his Formula One debut at the 2011 British Grand Prix with the (Hispania Racing) HRT team as a partnership with Red Bull Racing, for whom Daniel was test driving under its sister team Scuderia Toro Rosso.

He chose his driver number as 3 in honour of his childhood hero, NASCAR driver Dale Earnhardt. Ricciardo’s first win came at the First 2014 Canadian Grand Prix after that he only managed six wins in 185 starts with his last win being at 2018 Monaco Grand Prix.

Daniel won the British Formula 3 Championship in 2009. Daniel also won the 2016 Malaysian Grand Prix. He won the Formula Renault 2.0 in 2008, and In 2014, Ricciardo won the Lorenzo Bandini Trophy. Ricciardo won the Lareus Breakthrough of the Year in 2015. In 2018 Daniel Ricciardo signed a two-year contract with Renault that pays him $35 million per year.

The F1 superstar, Daniel Ricciardo has a huge fan following on Social Media, with 3.8 million followers on Instagram and 1.9 million on Twitter.