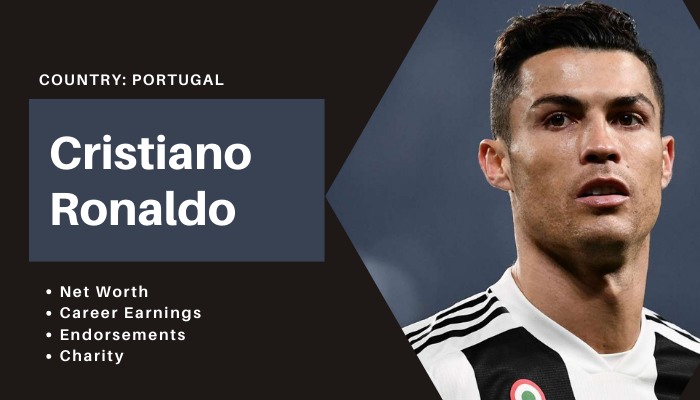 Cristiano Ronaldo Net Worth & Salary: How Much Does the CR7 Earn?

What is Cristiano Ronaldo net worth and how much does Ronaldo earn through club salary and endorsements? Is CR7 the world’s highest-paid footballer?

Cristiano Ronaldo is a Portuguese professional football player who plays for the Italian club Juventus and the Portugal national team. Ronaldo is without a doubt one of the greatest players in the history of football. One of the highest-paid footballer and the richest athletes in the world, Cristiano Ronaldo’s net worth is estimated at $500 million.

Ronaldo is arguably the best football player in the world, and being one of the greatest of all times of the game comes with its financial benefits. The Portuguese international is a powerhouse and leader on the field and a marketing juggernaut outside the pitch.

In May 2023, the 35-year-old became the first footballer and only third athlete to cross the $1 billion career earnings mark. Cristiano joined the elite list alongside Boxer Floyd Mayweather and Ace tennis star Roger Federer.

Ronaldo is one of the richest sporting personalities in the entire world. Ronaldo’s net worth is $500 Million as of 2023 according to our analysis. He was just behind Roger Federer, who finished with overall revenues of $106.3m. Ronaldo’s arch-rival and counterpart Lionel Messi is 2nd on the list with $126 million.

The second most earner in world football, Ronaldo pockets more than $70 million per year from Juventus.

What is Cristiano Ronaldo’s Salary?

Cristiano Ronaldo, in 2018 made a sensational transfer to Italy’s most successful club Juventus. After playing nine years for the Spanish giants Real Madrid FC, where he continued his reign of terror and became the club’s top scorer with 451 goals in 438 matches for the ”Los Blancos” after coming from Manchester United in 2009.

Juventus brought Ronaldo to Turin for a Club record transfer fee of £100 million. Ronaldo’s contract at Juventus is believed to be worth a humungous €31m ($34m/ Rs 245 crore) a year, which is three times more than any Serie A player.

Cristiano’s base Salary at Juventus, after adding all the bonuses for his stellar performances, may total up to $70 million a year.

The unstoppable goal-machine seems to have an unusual effect wherever he goes, the undisputed GOAT had the same impact on his arrival in Italy. Italian football is experiencing an immense boost in interest and financial earnings or the ”CR7 effect”.

The total amount of player earnings in Serie A has gone up to 1.4 billion euros this season, from 1.13 billion euros in the 2019 season.

He has a lifetime deal with Nike worth $1 billion. He has his own chain of restaurants, Perfumes and clothing. The most popular footballer also owns many brands including CR7 SHOES, CR7 UNDERWEAR, CR7 FRAGRANCE, CR7 JEANS and CR7 HOTELS

The Juventus star is only the third player after Michael Jordan and LeBron James to sign a lifetime deal with Nike worth $1 billion. Cristiano is tied up with numerous companies; more than one can count.

Ronaldo’s first business venture was In 2013, in the form of ”CR7 underwear”. The football Icon further went on to launch his own footwear, shirts, fragrance, branded gyms lines, jeans company, and restaurant group under the CR7 trademark.

Ronaldo invested £54 million in launching a global hotel chain with Pestana Hotel Group under his signature brand Pestana CR7. The prolific striker already has stakes in two hotels in Portugal, one in his native Madeira and another in the capital, Lisbon.

The former Madrid star’s most recent venture is with hair treatment clinic Insparya. Cristiano holds a 50-percent stake in the company and has named his girlfriend, Georgina Rodríguez, as administrator.

Ronaldo has also done his fair share of philanthropy throughout the years. In 2016, Ronaldo launched the ”CR7 Selfie app” to benefit the Save the Children initiatives. He also donated his 2016 Champions League and UEFA Euro winnings to a trustable charity and auctioned his FIFA ballon d” for $600,000 donation.

It should not come as a surprise that Cristiano Ronaldo lives a luxurious life. He loves to invest in excellent properties around the world and spend on sports cars.

Ronaldo lives in a $6.2 million villa in La Finca and owns private land on the island of Madeira. He also owns a list of cars that include Bugatti Veyron, Porsche 911, Maserati, Audi R8, Bentley Continental, Rolls Royce and Lamborghini. He also has his own yacht and a private plane.

Ronaldo has an elaborate collection of cars in his garage.

Ronaldo is known for his charity and kindness off the pitch which makes him one of the most charitable sports person on the planet.

He is a regular donator to various organizations. Ronaldo was named the world’s most charitable sportsperson in 2015 after donating £5 million to the relief effort after the earthquake in Nepal.

Cristiano Ronaldo was born on 5 February 1985 in Funchal, Madeira in Portugal. He began his career at the youth academy of Sporting CP and went on to play for their first team in 2002 at the age of 16. He played one season with Sporting where he impressed everyone with his skills and technique.

His performances caught the eyes of many big clubs like Liverpool, Arsenal, Barcelona but it was Sir Alex Ferguson’s Manchester United who signed him immediately in 2003 for £12.24 million making him the most expensive teenager in English football history at that time.

He was Premier league’s player of the season twice; he won the Premier league Golden Boot and the European Golden shoe in 2007-08 season. Ronaldo won his 1st Ballon d’Or at Manchester United in 2008.

After 6 seasons at United, Ronaldo joined Real Madrid in 2009 for a world record transfer fee of £80 million. Ronaldo carried his prosperous form to Real Madrid and it is at Madrid where he gained the Legendary Status. The amount of success and the number of awards, trophies he won with Madrid cannot be matched ever. In his illustrious career for the Los Blancos, Ronaldo played 447 times for them and scored 454 goals.

After 9 seasons at Real Madrid, Ronaldo Joined Italian champions Juventus in 2018 where he currently plays. He has played more than 130 matches and scored 100 goals for Juve where he has won 2 Serie A titles and 2 Italian Cups with them.

Ronaldo is the captain and leader of the Portugal national football team. He made his international debut in 2003 and has went on to make 173 appearances scoring 103 goals. He is the 2nd highest goal scorer in world football. Cristiano carried his club glory with Portugal as well. He inspired Portugal to win the 2016 Euros and the Nations League 2018.

Still going strong at the age of 36, Ronaldo is undoubtedly one of the greatest ever to play the sport.

On Instagram, Cristiano is not just the most famous athlete on the planet; he’s the most popular personality – with 227 million followers, which is more than the entire population of Russia (145 million) and also more than the followers of every Premier League team combined.

According to Forbes, Ronaldo earns nearly (£780,487) or $1 million per paid Instagram post. He has the second-highest social media revenue at $23.3 million. According to specific reports in 2019, CR7 earned around $47 million through Instagram, which is more than his Juventus annual salary.

Disclaimer: All the facts and figures about Cristiano Ronaldo net worth are based on analysis, research, interviews, official statements, reliable sources, and reports released by trusted sources.