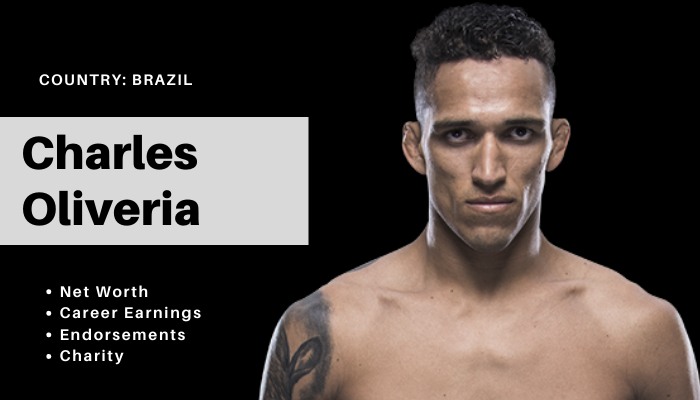 Charles Oliveira is a Brazilian professional mixed martial artist. He competes in the Ultimate Fighting Championship (UFC) lightweight category. Currently, he is at 3rd position in UFC lightweight rankings. The Brazilian holds the record for most submission wins (14) in UFC. Charles has also won the performance of the night bounce the most number of times in UFC history. He earns a good amount of money from fighting. According to our research, Charles Oliveria net worth is estimated at around $375,000.

Born on October 17, 1989, in Guaruja, Sao Paulo, Brazil Charles started Brazilian Jiu-Jitsu training at the age of 12. In 2003, he won his first major title as a white belt. He now holds a black belt in Jiu-Jitsu. Charles made his UFC debut in 2010 against Darren Elkins at UFC Live: Jones vs. Matyushenko. The Brazilian won the match by submission. For interesting news about jiu-jitsu check jiujitsu-news.com.

Throughout his UFC career, he has beaten notable names like Tony Ferguson, Donald Cerrone, Frankie Edgar, Nik Lentz, Kevin Lee etc. Famously called ‘Do Bronx’, he will next face Michael Chandler for the lightweight championship at UFC 262. Oliveria has a record of 30-8-0, 1NC in the Ulitmate Fight Championship (UFC).

The strength of Charles Oliveria is his lethal submissions. He is a submission specialist. Charles tied with Donald Cerrone for the most finishes in UFC history.

The Brazilian MMA fighter, Charles Oliveria’s net worth is estimated to be $375K as of 2022. According to the sources the career earning of the fight is around $1,122,600. The most prime source of income for Charles Oliveria is UFC. Here is the list of earnings from his UFC fights.

The third-ranked lightweight champion Charles Oliveira is earning quite good at the UFC. Before moving to UFC, the Brazilian has fought at the Eagle Fighting Championship, Ring of Combat, Jungle Fight and the Warriors Challenge.

Disclaimer: All the facts and figures about Charles Oliveria net worth are based on the analysis, research and reports released by trusted sources.