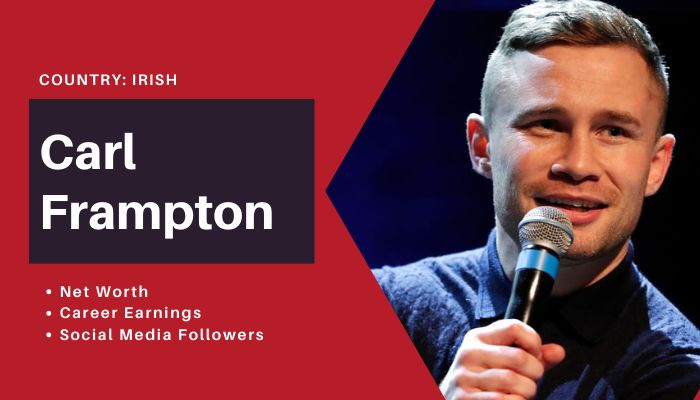 Hailing from Northern Ireland, Carl Frampton is a professional boxer who competes in the featherweight division. He was the first Irish boxer to win titles in two different divisions – super-bantamweight and WBA featherweight champion. Carl is commonly known as ‘The Jackal’. He currently ranks #7 in ESPN featherweight rankings. He is a millionaire and Carl Frampton’s net worth is around $2 million (Approx).

Started boxing at the early age of 11, Frampton has an excellent career in amateur boxing. He registered 144 wins before stepping into professional boxing. The Irish won his first-ever title in 2014 when he defeated Kiko Martinez and won the IBF super-bantamweight title.

In 2016, he defeated Scoot Quigg to add another title- the WBA super-bantamweight title to his name. In the same year, he got one of the most prestigious titles of his life as he was awarded an MBE (Member of the order of British Empire).

As per the records on The Net Worth Portal, Carl Frampton net worth for the year 2022 is estimated to be $2 million (until now). He earns a massive sum of $1.5 million per fight.

Due to his immense popularity, the Irish boxer is a brand ambassador of 32Red and clothing brand 11 Degrees. The boxer is sponsored by the world-renowned boxing glove company Everlast.

The Irish will next up against Jamel Herring of America. Jamel will defend his WBO Super featherweight title against Carl Frampton. The fight will take place on April 3, 2022, at Caesars Bluewaters in Dubai.