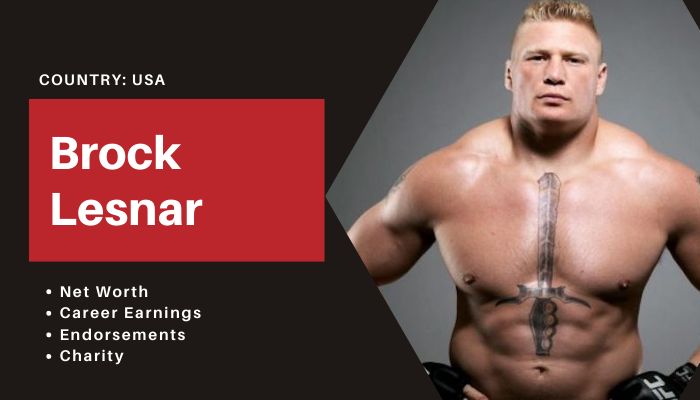 Brock Lesnar Net Worth & Salary: How Much Does the WWE Star Earn?

By Siddharth Muruga Last updated May 3, 2021

Brock Edward Lesnar is one of the most decorated wrestlers, retired mixed martial artist, and retired professional football player. Brock had many titles under his belt including WWE Championship and Universal Championship. One of the best WWE wrestlers, Brock Lesnar’s net worth is estimated at $28 million as of 2023.

Even though he won the contest, after tested positive for clomiphene, a banned substance on the UFC’s anti-doping policy, he was suspended from the UFC by the Nevada State Athletic Commission for one year and fined $250,000 which prompted him to retire from UFC for the second time.

He was also on the cover of various WWE title Video Games produced by 2K and UFC video games produced by EA Sports. He also was part of three featured Hollywood films till 2023.

According to our research, Brock Lesnar net worth is estimated to be $28 million.

Brock Lesnar is currently having a contract with only the WWE. The WWE superstar salary is estimated to be around $12 million and demands $500,000 per main event appearance.

Lesnar started his amateur wrestling career at Bismarck State College and the University of Minnesota, Lesnar signed with World Wrestling Federation in 2000. He debuted in 2002 after training with OVW and won the WWE Championship in August 2002 in Summerslam becoming the youngest ever wrestler to win a championship title.

After a couple of years in the wrestling scene, he moved out to pursue a career in National Football League. After getting named in defensive tackle for the Minnesota Vikings, he was dropped before the start of the 2004 season. In 2005, he went back to wrestling with New Japan Pro-Wrestling. After some conflict with NJPW, he moved to Inoki Genome Federation.

IN 2007, Brock moved a career into mixed martial arts (MMA), as he signed with Japanese Mixed Martial operation Hero’s which is currently defunct. He then moved on to the Ultimate Fighting Championship (UFC) in October and in November 2008, he defeated Randy Couture to clinch his first UFC Heavyweight Championship.

He became a fan favourite and featured in some intense pay-per-views but after a couple of diverticulitis surgeries, he retired after losing to Alistair Overeem in UFC 141.

Disclaimer: All the facts and figures about Brock Lesnar net worth are based on analysis, research, interviews, official statements, reliable sources, and reports released by trusted sources.