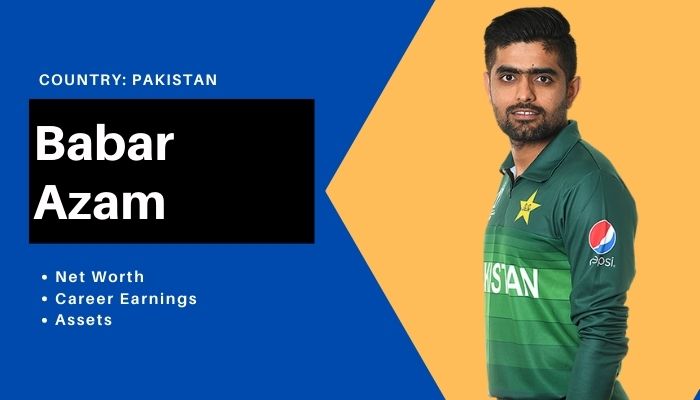 Babar Azam is arguably Pakistan’s greatest batting prospect to step on the pitch. The 27-year-old is the highest paid Pakistani cricketer and impressed the world with his skills, and often draws similarity with Indian legend Virat Kohli. According to many leading news portals, Babar Azam’s net worth is around $4 million as of 2022.

His popularity is not limited to just Pakistan in fact, the player enjoys global outreach. As they say, money smells prodigies, such in his case, the boy is blessed with good quality cricket earnings and various brand deals.

Babar Azam was born on 15 October 1994 in Lahore, Pakistan. The cricketer had connections with professional cricketers as he is cousins to Kamran Akmal and Umar Akmal. However, he made his own path to the national side by being a ball boy.

In May 2015 when 20-year-old Babar made his debut for the national side in limited-overs cricket against Zimbabwe. The player scored an impressive fifty in his debut to even earn him a spot in the Test squad and the T20 squad.

The total net worth of Babar Azam is $4 million that is 29 Crores Indian Rupees.

Babar Azam has been consistently the top performer for Pakistan Cricket Team, while with great hard work comes rewarding money.

Azam is also quite popular among the brands as he has signed endorsement deals with brands like Head & Shoulders, HBL, Oppo and Huawei.

Disclaimer: All the facts and numbers about Babar Azam net worth are based on the analysis, research and reports released by trusted sources.