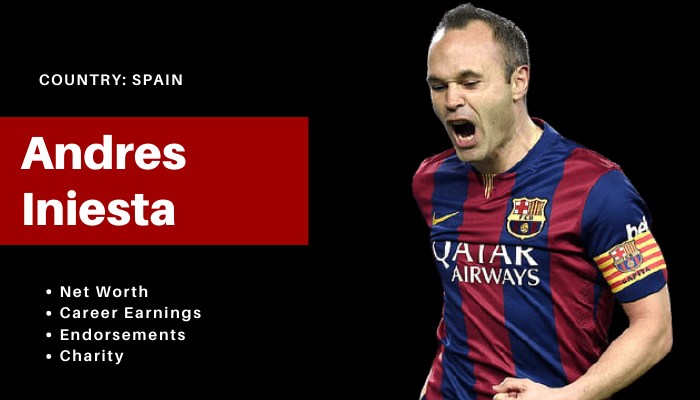 Andres Iniesta is a professional footballer who plays for the Japanese club Vissel Kobe. The ex-Barcelona player is regarded as one of the greatest midfielders in the history of football. Iniesta is one of the wealthiest footballers. The 37-year-old had a long illustrious career at Barcelona that saw him grabbing capital gains. Andres Iniesta’s net worth is estimated to be $100 Million.

Andres Iniesta is one of the most successful and most decorated footballers. The midfielder played more than a decade at FC Barcelona and is a legend of the game. The midfield maestro is known for his vision, accurate passing and precise technique.

According to reports and sources, Andres Iniesta has a net worth of $100 million which makes him one of the richest football player in the world. His weekly wage at Vissel Kobe is $600,000 and his annual salary is $33 Million.

Iniesta had a 20-year long deal with Nike. But now he has left that deal and signed with Japanese sportswear brand Asics instead. He has endorsement deals with Nissan and UFX.com. He owns his own winery and is a stakeholder and part owner of Spanish club Albacete.

Iniesta began his career at the youth academy at Albacete in 1994 before moving to Barcelona in 1996. He was with Barcelona B till 2002. Since 2002, Iniesta has been a regular starter at FC Barcelona and eventually went on to play for the Cules till 2018. He made 674 appearances for Barca scoring 57 goals.

Andres Iniesta was a part of Spain’s golden generation of footballers and he had a trophy laden career for both club and country. He has won 9 La Liga titles,   4 Champions Leagues, 6 Copa Del Rey, 2 UEFA Super Cups, 6 Spanish Super Cup.

After more than a decade, Iniesta Left Barcelona to join Japanese club Vissel Kobe in 2018. He recently signed a contract extension with Kobe which will see him retire at the Japanese Club.

Iniesta has 131 appearances for Spain and has scored 13 goals. His goal in the 2010 FIFA world cup final against Netherlands won Spain its first World Cup. He has won 1 World cup and 2 Euros with Spain.

Disclaimer: All the facts and figures about Andres Iniesta net worth are based on the analysis, research and reports released by trusted sources.