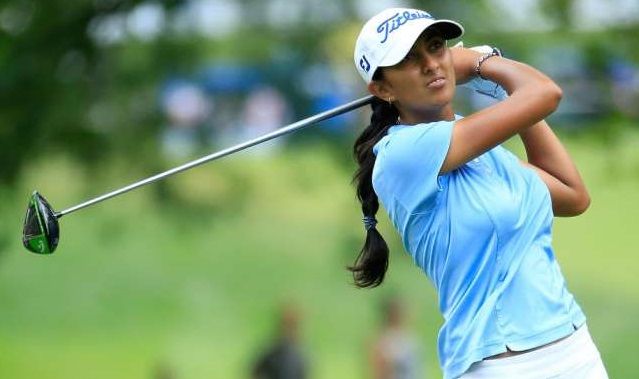 Aditi is an Indian professional golf player who is starting to make headlines. She is presently the flag bearer of Indian women golf in our country and our present hope for an Olympic medal in Golf. She is the youngest Indian golfer at 19 years, male or female, to have played all majors. Aditi is currently just 22 years old, has a lot left in her tank, and has a bright future ahead in the sporting world. Aditi Ashok was born on 29 March 1998 in Bangalore Karnataka, she first picked up the golf club and started playing when she was just six years old. Her father, Pandit Gudlamani, is the main support force behind her passion for the sport as he is also a Golf player in Indian Domestics. Her father is also her caddie and accompanies her in her tours across the globe. Aditi did her complete schooling at The Frank Anthony Public School, Bangalore.

Aditi joined the Karnataka Golf Association and was trained under Steven Giuliano. At the age of 9, she played her debut tournament in Karnataka Golf Club. Aditi won the Ladies British Amateur tournament at the Aicha tour school in 2016 and is the Indian and the first Indian to do so.

At a young age itself, she started showing promising signs when she finished her amateur career at World Number 11 rank on the World Amateur Golf Ranking (WAGR) and was by far the Best Indian Amateur and Best Asian Amateur. Aditi is a 3 time National Junior Champion (2012, 2013 & 2014) and 2 time National Amateur Champion (2011 & 2014).

2016 was Aditi’s highlight year as she became the first Indian to win a Ladies European Tour title and won the Rookie of the Year award. Also ranking 2nd in Order of Merit at the LET, having a putting average of 28.91. After she participated in the 2016 Olympics, Aditi attracted a lot of media and public response towards herself and also towards Golf. Tournaments she participated in and her wins are :

She had a low putting average in 2018 but made a reasonably good comeback in 2019 after ending the year with back-to-back second-place finishes on the Ladies European Tour.

Aditi Ashok’s world ranking is currently 132nd in the Order of Merit.